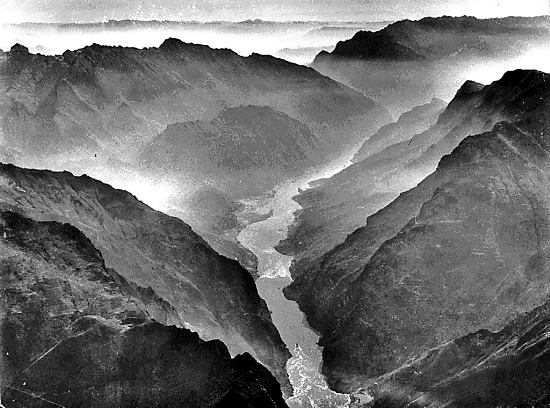 China is defined by its two great rivers: The Yellow River and the Yangtze River. For millions of years these rivers have formed the lifeblood of Chinese civilization. The the Yangtze has always played a critical role in the transportation of goods, while the Yellow River, also kown as the "Mother River", is a source of rich fertile soil and irrigation water.

With good, however, always must come struggle. These rivers periodically transform themselves into raging torrends, sweeping away entire villiages. The paradox is, the river that is necessary for life to flourish, is also responsible for the most death and destruction. Throughout history, China’s national identity has been shaped by it's struggle to control these waters.

This theme runs deep through Chinese culture. Every Chinese schoolchild knows the story of Yu The Great, the legendary first ruler in ancient China, who tamed the raging flood.

As the story goes, Yu grew up watching his father, the ruler, build a series of dikes and dams along the river in an attempt to control the floods. Time and time again the river overpowered his dams. After nine years Yu took his fathers place as ruler, and decided to approach this problem differently. Instead of blocking and disturbing the river's natural course, Yu devised a system of irrigation canals, which diverted the flood waters into fields. This system allowed ancient Chinese culture to flourish along the Yellow River, Wei River, and other waterways of the Chinese heartland. This project was so successful that he earned the title "Yu The Great", and is celebrated still today.

Though he may be mythical, Yu The Great set the precedent for rulers to come, many of whome have attempted methods of harnessing the waters. 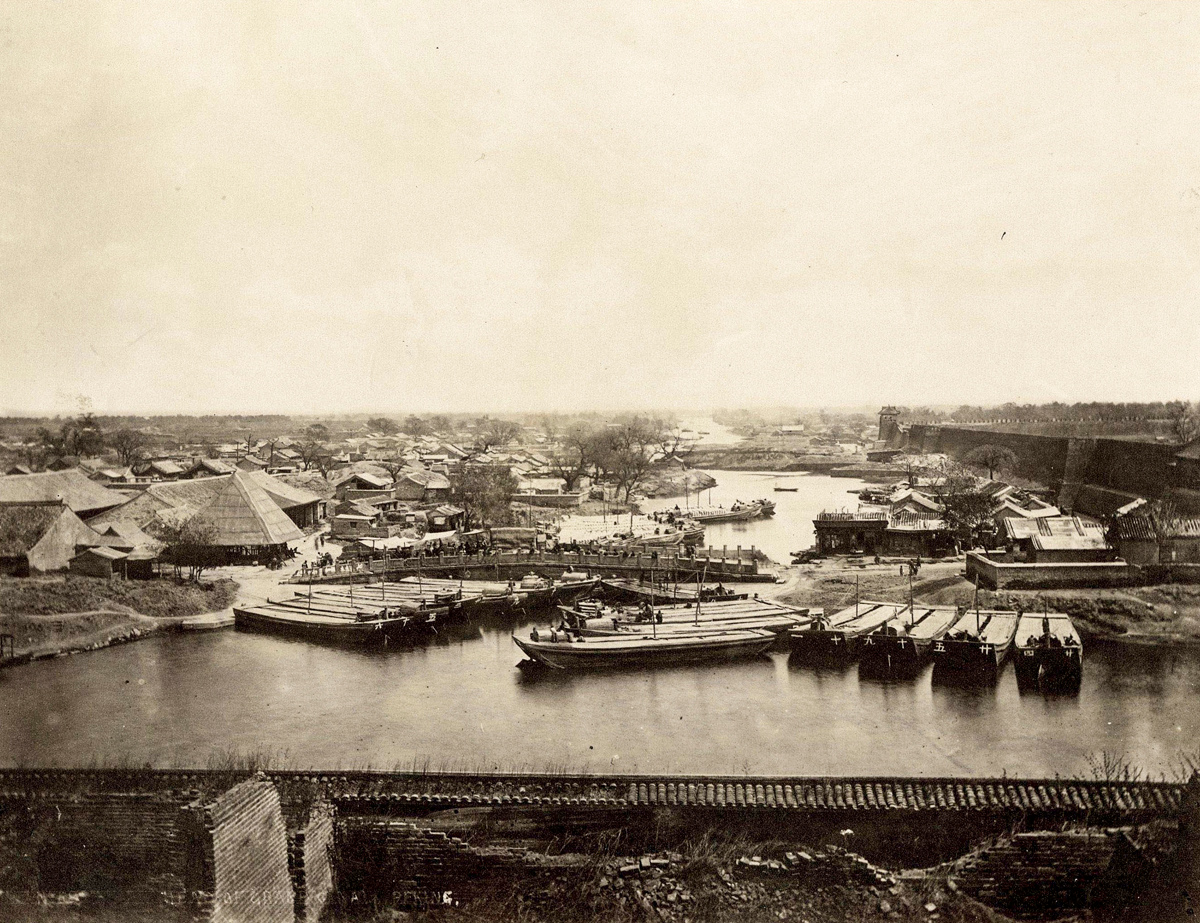 Many will claim that the canals created by Yu the Great form the first section of the Grand Canal, which stretches 1,104 miles and connects the two great rivers. Creating this canal was the life work of several rulers throughout history, before it was completed during the Sui dynasty (581–618 CE). Beginning in the thirteenth and fourteenth centuries, the Grand Canal was the primary route for grain and other commodities from south China to reach the capital city that would become Beijing, making it vital part of economic life in early China. The canal eventually fell into disuse, but recently is being revived.

"To some extent, China’s leaders today are still judged by their ability to harness the waters" 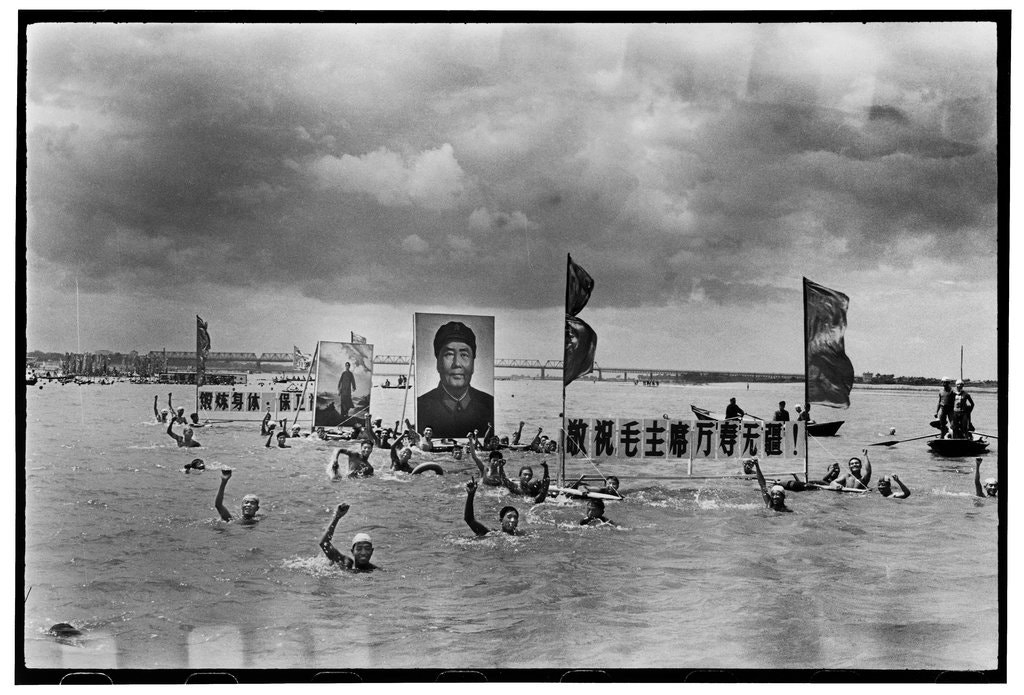 In 1949 Communist Party Chairman Mao Zedong took power. Like the generations of rulers that came before him, Mao too dreamed of harnessing the waters. He became fascinated with the idea of overpowering the great force of the Yangtze River. In a poem, he wrote:

A bridge will fly to span the north and south,
Turning a deep chasm into a thoroughfare;
Walls of stone will stand upstream to the west
To hold back Wushan's clouds and rain
Till a smooth lake rises in the narrow gorges.
The mountain goddess if she is still there
Will marvel at a world so changed.

In this he dreamed of the Three Gorges Dam, but the Chinese economy was not yet strong enough to support such a project. He also dreamed of a way in which the abundant water in the south could be harnessed for use in the more industrialized north: "there's plenty of water in the south, not much water in the north. If at all possible; borrowing some water would be good."

Mao's big ideas were not without opposition. Hydroengineer and Professor Huang Wanli, warned that it was a poor idea to dam the main stream of a great river. Like the great Yu, he suggested working with the water rather than against it. Diverting the water could provide more effective flood control, and a series of smaller, less destructive dams could provide the same amount of hydropower. 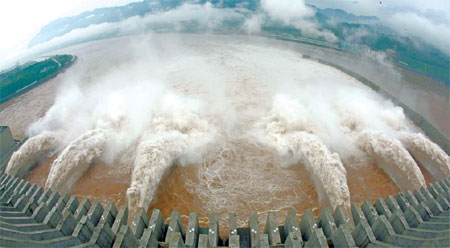 In the post-Mao era came economic reform, and China's economy grew rapidly as it became "the world's factory". With this growth came an increaseing need for energy, to fuel the production and increase in population. The government turned to the Three Gorges Dam that Mao had long dreamed of, in the hopes that it would generate much needed power and control the devastating floods.

Construction of the dam began in 1994 and was completed in 2012. The Three Gorges Dam is the world’s largest power station in terms of the energy it generates, with a capacity of 22,500 megawatts, which reduces China’s dependency on coal. The dam also allows large ships to travel up and downstream. For the first time, ships from Chongquing will be able to transport goods all the way to the sea at Shanghai. 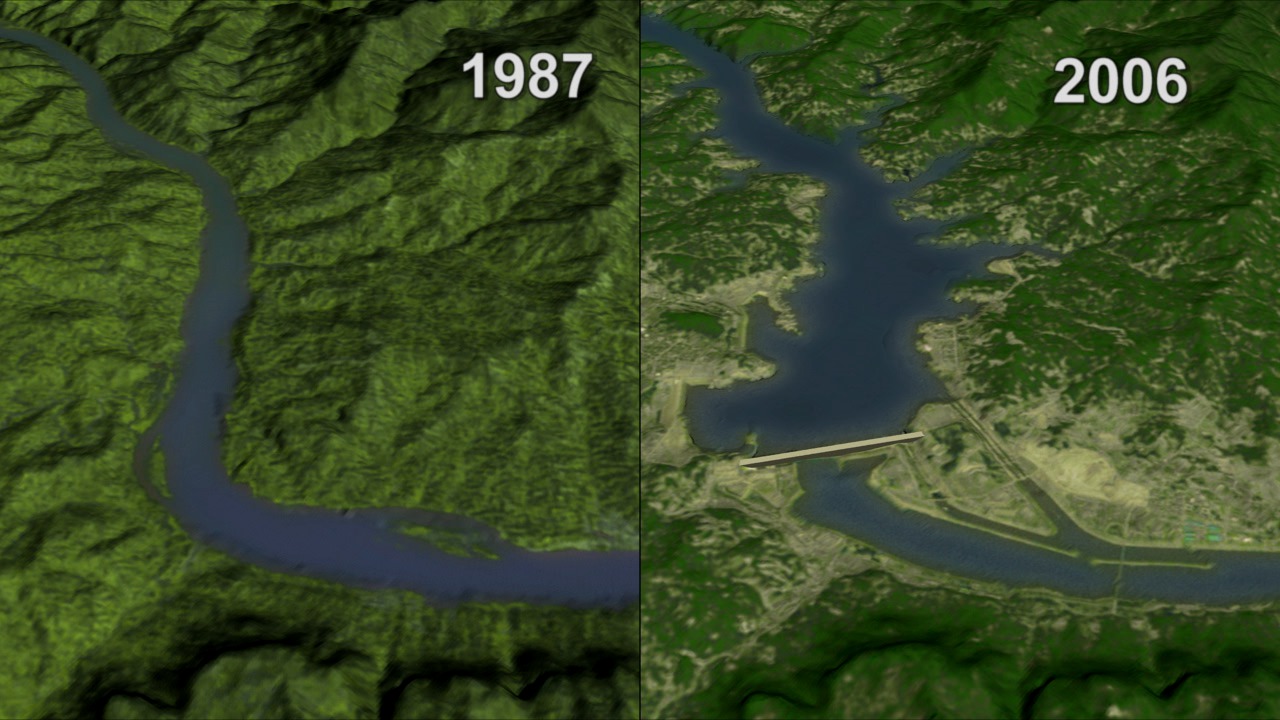 This accomplishment however comes with many losses. The dam engulfed 13 cities, 140 towns, 1,352 villages and about 650 factories. It displaced 1.3 million people whose homes, culture and history were washed away with the river. It destroyed the iconic scenery of the Qutang, Wu, and Xiling gorges, along with countless archaeological sites. Human and industrial waste from cities below polluted the waters of the Yangtze. Moreover, the enormous amount of water trapped within the gorge has caused multiple large landslides. The overall ecology of the river system has been irreversibly damaged, and several species have been driven to extinction. Below the dam, reduced sedimentation creates less fertile soil, which harms the crop production of villiagers downstream. 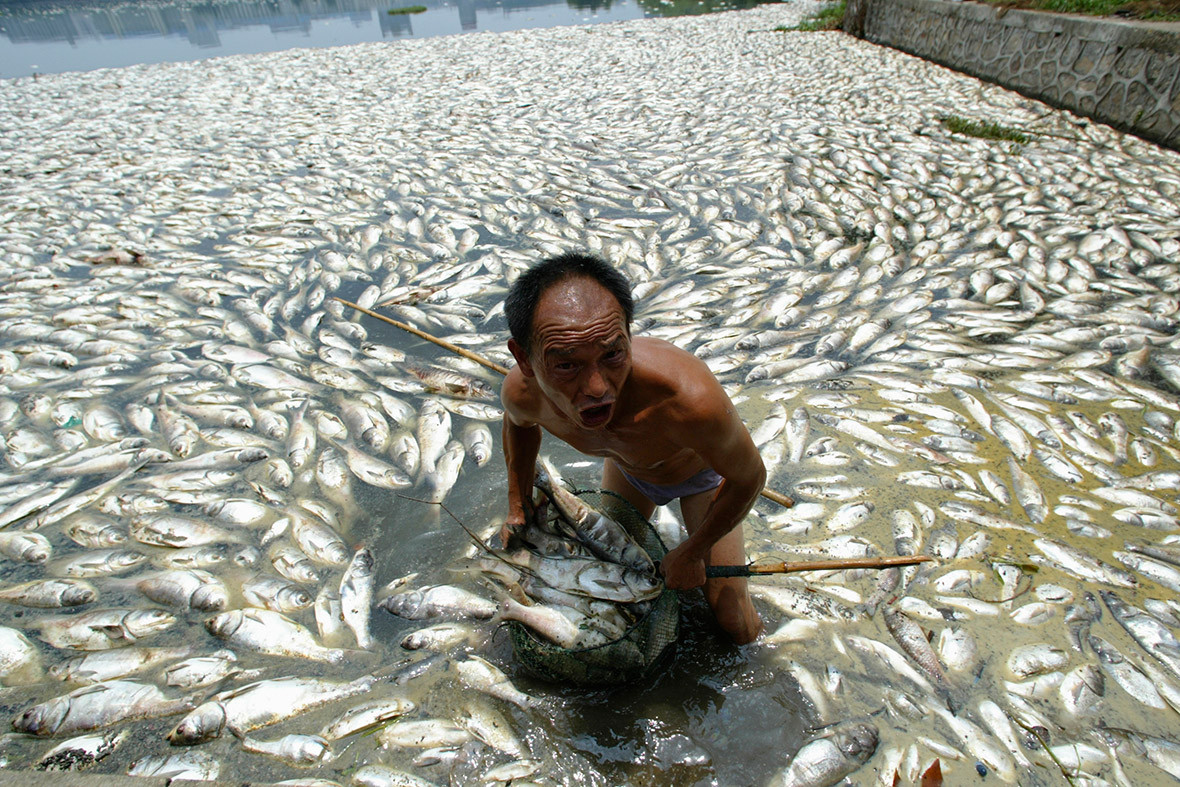 With the rapid growth of China's economy came an enormous amount of pollution, for which China was unprepared. About one third of the industrial waste water and more than 90 percent of household sewage in China is released into rivers and lakes without being treated. Nearly 80 percent of China's cities have no sewage treatment facilities.

In a lake in Wuhan, central China's Hubei province, more than 110,000 pounds of fish died due to pollution and hot weather. This example depicts what is happening in lakes and rivers across China.

"We have seen this in most countries. Income per capita, or economic growth, is directly tied to an increase in pollution."

For many villiages along the rivers, industrialization has brought a plague to their citizens. Above, a villiager blames the polluted stream and well water for the illness and death plaguing her village. The cluster of paper and chemical factories upstream is discharging polluted waste water into the stream the villiagers rely on for their drinking, washing and cooking water.

The rates of cancer in these villages are shocking. Many of the cancer victims are in their youth, and many of them have rare cancers of the esophagus, rectum, stomach and liver. The death rate is high, as many villiagers cannot afford treatment. 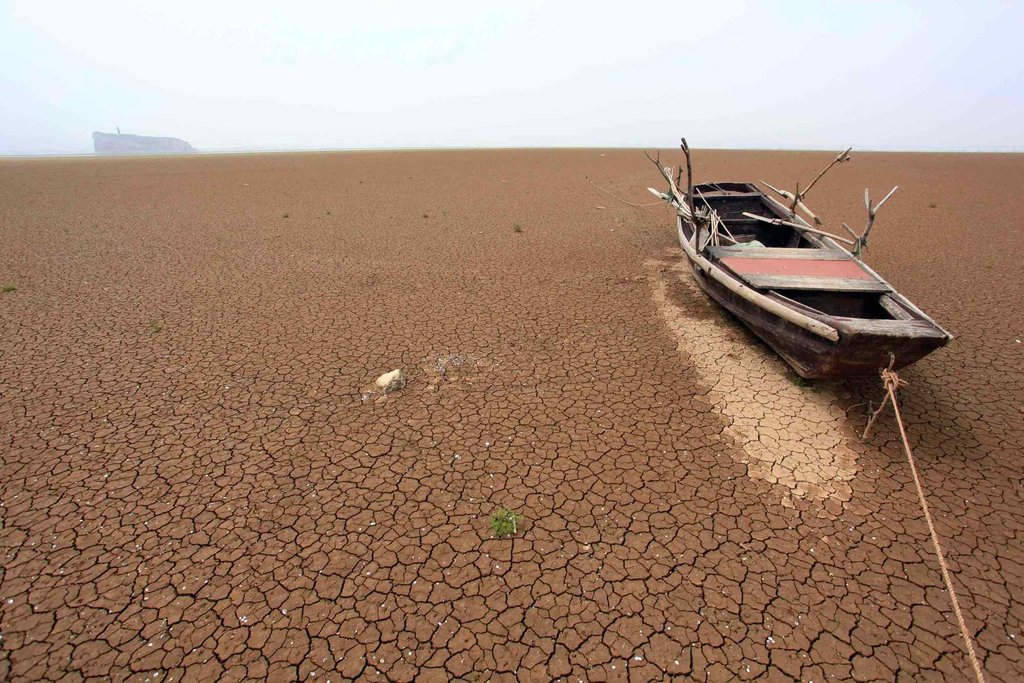 Just as The Yellow River was needed at the birth of China's civilization, it is still vital to making northern China inhabitable. It supplies water to 155 million people, or 12 percent of the Chinese population, and irrigates 18 million acres, 15 percent of China's farmland.

The Mother River has ceased to flow an increasing number of times since 1972, when it ran dry for the first time in recorded history. 80 to 90 percent of its water has been taken upstream for urban areas, industry and agriculture. In this way, harnessing the waters of the Yellow River has depleted this vital resource of life.

Today, the focus of the Chinese leaders still lies in gaining power over the waters, or lack there of. The problem is one of scarcity, and geography. Northern China holds the majority of the population, yet the water supply is largely located in the south. As China's population grows, water resources continue to dwindle, and what is left continues to become increasingly polluted. In a last-ditch effort to harness the remaining water, China has turned yet again to a big idea first proposed by Mao Zedong in 1952. The South-North Water Diversion Project will channel water from the Yangzi River to the water-starved North China Plain. This project has reopened the long forgotten Grand Canal, which first brought life to the Chinese economy centuries ago.

Although the project decreases the likelihood of flooding in the south and drought in the north, the ecology of the Yangzi River Basin has been damaged, and 300,000 people displaced. The water from the Yangtze is polluted as well, causing cross-pollution with the Yellow River basin.

Once again, many critics argue that attempting to inhibit the natural course of such a large river is futile. Many people point to alternative solutions, such as shifting the focus to consumption, promote water conservation, increase fines for water polluters, and cleaning up the rivers rather than fighting against them.